Skip to content
January 13, 2012 in Uncategorized Posted by maris

This article was originally published on GeekWire.

Rover.com, the Seattle upstart that matches those seeking doggie care with nearby pet sitters, has raised $1.8 million, according to a SEC filing. The site, which launched last month, has an unusual history.

It was started by venture capitalist Greg Gottesman who pitched the idea at a Startup Weekend event in Seattle last year. Gottesman remains actively involved in the company, and Madrona Venture Group is the primary backer of the company. 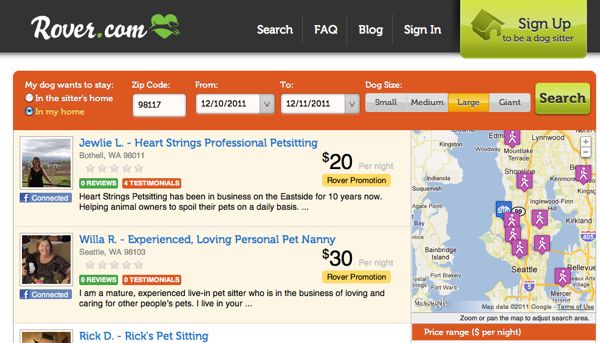 “It is a big opportunity, and it is one of these incredibly large industries that is fundamentally broken,” he said. “Between kennels and private dog sitting, it is a $6.5 billion to $8 billion industry, just in the U.S. and it has a huge rate of dissatisfaction.”

Pet owners can choose whether they have a small, medium or large breed, and filter the results by pet care in the home of the sitter or the owner. Prices on the site, which is only available in Seattle at this time, range from $20 to $70 per night.

Madrona had previously invested $250,00o in the company, and at the time of the launch Easterly said they planned to raise more cash.

Today’s filing does not indicate other investors who are involved, but it does say the company could raise up to $4.3 million in the round.